Amid growing unrest, Portugal’s Finance Minister Vitor Gaspar unveiled details recently of a new wave of austerity measures, aimed at reducing the country’s deficit and appeasing its bail-out creditors. Keen to secure the next tranche of international aid from Portugal’s bail-out agreement, Gaspar previewed the 2013 budget providing for fiscal measures totalling around EUR4.3bn.

Among the key measures to be included in the budget are plans to introduce a 4% extraordinary tax on income next year and to reduce from eight to five the number of income tax brackets. With both these measures the average income tax rate will increase from 9.8% to 13.2%. Public servants who saw their two annual bonuses cut this year will have one bonus returned, while pensioners will recover the equivalent of 1.1 bonuses.

Other proposed tax rises announced by the finance minister include plans to impose new levies on capital gains and to introduce a financial transactions tax. Precise details of these proposed measures have yet to be finalized.

Unsurprisingly, the proposals provoked immediate outrage from unions and from workers, accusing the government of simply transferring the fiscal burden from companies to individuals. The u-turn marked a significant turning point, highlighting Portugal’s waning patience and increasing frustration with the austerity measures imposed by international lenders in return for the country’s EUR78bn bailout programme, agreed with the Troika last year.

Portugal has already pursued a rigorous fiscal policy, raising taxes, cutting wages and public spending. The government aims to reduce the deficit from a forecast 5% of gross domestic product (GDP) this year to 4.5% in 2013, and to subsequently 2.5% of GDP in 2014, under the 3% limit.

The new proposals are to be examined by the Portuguese parliament on October 15, the budgetary measures have already gained approval from the European Commission

Acknowledging the new measures will have a huge impact on the lives of the Portuguese, the government also revised up its unemployment rate forecast, now expecting it to reach 16.4% in 2013, above its estimate of 16% forecast earlier in September.

The British Prime Minister, David Cameron, made a rare appearance in the local paper today on the back of him threatening to veto the “multiannual” budget of the European Union (EU) for 2014-2020, criticizing attempts to increase Europeans spending “scandalous"

"If you must say no to a deal that is not good for the UK, I’ll say no," Cameron said in an interview published today in The Sunday Telegraph. He says it is not possible to increase spending, and also put forward a “bold thinking” plan for the EU to have two separate budgets – one for the 17 nations in the eurozone and another for the 10 outside it, including Britain. This could potentially save the UK money – but would effectively set up a two-tier Europe.

The 27 have been discussing in recent months the EU’s multi-annual budget for 2014-2020. The first meeting in late August in Nicosia, Cyprus, revealed major differences between Member States. On September 3, Van Rompuy called for  an extraordinary summit of European leaders on 22 and 23 November to be dedicated exclusively to the negotiations on the multiannual budget 2014-2020.

In June 2011, the European Commission presented a proposal of 1,083 billion euros of expenditure for the period 2014-2020, which represents 1.11 per cent of European gross domestic product and an increase of 5 percent over the 2007-2013, contested by countries such as the UK and Germany.

At the time, the Commission president, José Manuel Barroso, stated that Portugal would "clearly winning" if the 27 approve the proposal submitted framework of the EU budget from 2014, the said that Portuguese Government has considered the initiative proposed by  Brussels "positive" and a "good basis" for negotiations.

For details of the recent outbreak please see the previous post. As of this last weekend, the regional secretary for Social Affairs, Francisco Jardim Ramos, hadeclined to update the number of people infected, describing this number as “dynamic”! Various (unconfirmed) sources report that there are just two cases of the fill blown dengue-fever.

However on Monday he was more forthcoming: “Until noon today, only three cases were admitted to the main Dr. Nelio Mendonca Hospital in Funchal with the condition. On the first day were 37 cases. At the end-of-week numbers were also high, but today started down significantly ….. so far 14 have been confirmed in total”.

The secretary said: "The disease is a benign strain. This is like the flu."

President of the Institute of Health Administration and Social Affairs, Maurício Melim, told broadcaster Rádio Renascença that citizens should watch out for symptoms and take precautions, “Only those with fever, joint and muscular pains, swollen hands and feet, patches on upper and lower body members should contact the health services”, he said.

Once again the parish of Santa Lucia, Funchal, where, in 2005, the first mosquito that transmits dengue fever virus was detected, seems to be at the centre of the outbreak, with local residents saying quoted in the Diario as claiming that the numbers are increasing year-on-year. I remember a few years ago the owners of cafe in Funchal always referring to any odd mosquito that turned up as being “from Santa Lucia”.

The Diario has been running the story that the outbreak of the disease has been predicted for six years. A search on our own archives reveals that we reported on the potential problem four years ago: 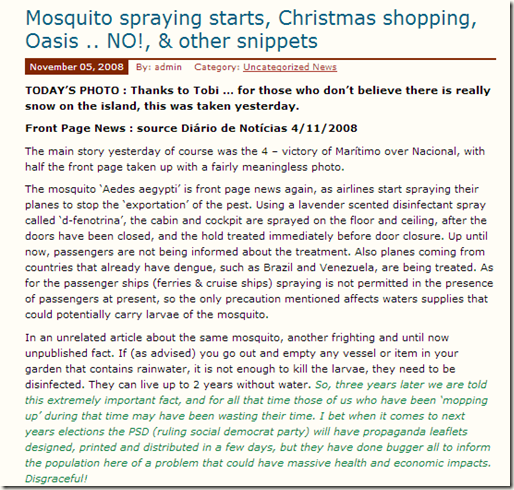 The Directorate General of Health (DGS)  has announced a series of recommendations for all citizens traveling to Madeira due to dengue cases confirmed in the archipelago.

Recalling that dengue is not transmitted from person to person, but only by the bite of mosquitoes infected with the virus, the DGS stressed that the use of insect repellents is an essential step in prevention.

Thus, in case of traveling to Madeira, the DGS recommends “using fresh clothes and wide, preferably in light colours and covering the largest area possible body, and the choice of accommodation preferably with air conditioning or mosquito nets”.

“The DGS requested, however, that the repellents are not used in children under the age of 2 months. They also warned that during the stay or within 14 days after returning home, it is not recommended to use acetylsalicylic acid (Aspirin) and other  drugs (ibuprofen).

Symptoms that are commonly associated with dengue fever are sudden onset of headache, muscle aches, joint pain, or, more rarely, bleeding or spots on the body”.

The DGS stressed that for controlling fever and pains  Paracetamol can be used and you should still contact an attending physician or a local health service.

If anybody is concerned about medication that should not be taken when suffering from Dengue Fever, the blog cannot offer medical advice. However, if you were to Google the fever and “nonsteroidal anti-inflammatory drugs” you would find a wealth of information.