Moves to prevent privatisation of TAP

Members of the PCP parliamentary party in the National Assembly of Portugal will propose an initiative on the 19th of October aimed at preventing the privatisation of TAP. If I am not mistaken this could conflict with the asset-disposal conditions of the EU bail-out? Mind you, TAP have been trying to make themselves as “unattractive” as possible recently without any assistance from the politicians – strikes, price hikes (I looked at flying to Lisbon recently – prohibitive on TAP even on short notice – easyJet so much better provided you are prepared to travel without luggage or any  other semblance of civilisation). Last time I flew TAP the free baggage allowance was a generous 23Kg per person  – and up until the middle of this year they carried golf clubs for free as well.

Tiago Sousa, of the Naval Club of Funchal, is at Lake Havasu in the United States for the World Jet Ski Championship. He won the European Champion two months ago and wants to return to the world title in the premier class of the sport, the “Ski GP”. "I’m going to win" predicted the 26 year-old.

Funchal is among the 35 cities honoured with the title ‘Family Responsible Authority + 2012’, which rewards good practice in family policy in Portugal.

"This recognition results from a nationwide survey to which 103 responded municipalities (29 more than last issue) where they were analysed and family policies of municipalities in ten areas: support for maternity and paternity; support to families with special needs, basic services, education and training, housing and urban planning, transportation, health, culture, sport, leisure and free time, co-operation, institutional relations and social participation, and other initiatives. Analysed are also good practice for local authorities with municipal employees on reconciliation between work and family, says a note from the Observatory of Municipalities Family Responsible.

The winning municipalities will be given a green flag in a ceremony scheduled for October 24th, at the National Auditorium Cities in Coimbra

Caterpillar of the Death’s-head Hawkmoth:

Thanks once again to Casa Parsons for the correct identification of the “bug” recently found in Gaula and pictured in the last post. I have replicated below the information they forwarded: 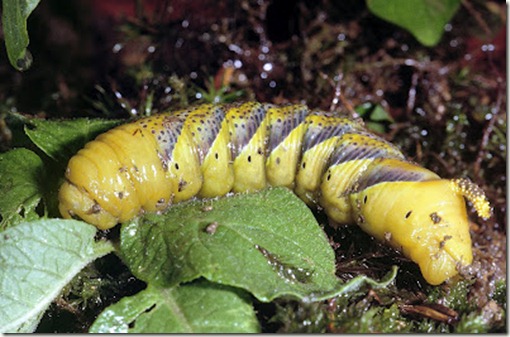 “Only a fairly rare spring and summer visitor to Britain, the Death’s-head Hawkmoth A. atropos occurs as a breeding species throughout North Africa and the Middle East and northwards to the Mediterranean. It is resident in parts of southern Europe, and migrates throughout Europe – but cases of breeding have been reported on occasion from Britain, with discoveries of caterpillars in several southern counties. Up to 5 in long, and of robust girth, the impressive-looking Death’s-head caterpillar varies from several shades of green to lemon, dark brown, or even purple, and is embellished on each flank by seven mauve or azure chevrons, edged decorously with bright yellow or cream. This bold but beautiful colour scheme is topped off with a hazy sprinkling of deep violet or sparkling white dots, and as a final flourish its body’s rear end bears a striking curved horn.

“A rare migrant to the UK, with a wingspan that can exceed 5.5 in and a weight that can fall little short of 0.1 oz, it is incontestably Britain’s largest species of moth. Its plum-coloured, wavy-lined forewings and rich golden-yellow hind wings, not to mention its bulky body striped boldly underneath in dark brown and primrose bands, also render it one of this country’s most attractive moths. Nevertheless, all of these features are eclipsed by a single, but very singular, additional characteristic – one which instantly identities this species and distinguishes it from all others in Britain, which has woven around it a near-indestructible web of folklore and fear, and which has earned it its extremely sinister-sounding English name. 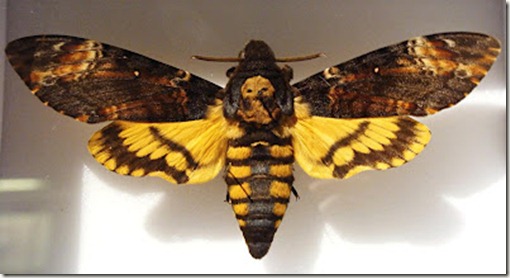 ”This feature is a strange marking on top of its thorax’s front portion, which, by a grotesque quirk of nature, forms a surprisingly realistic image of a human skull, ghostly white in colour with black, empty eye sockets. Enhancing this macabre image, the thoracic hairs bearing it are erectile, so that when they are raised up and down while the moth is resting, the ‘skull’ appears to be nodding!
To many superstition-ridden people in the past (and even to some today) this bizarre insignia is considered to be nothing less than the symbol of Death itself, so that A. atropos is commonly referred to as the Death’s-head, or Death’s-head hawk moth in full.