From the Telegraph on Wednesday:

“Yields on 10-year Spanish bonds punched back above the danger line of 6pc and spreads over German Bunds reached 450 basis points, intensifying pressure on Madrid as it continues to resist a sovereign bail-out.

The alliance of hard-line creditors said the European Stability Mechanism (ESM) – or bail-out fund – could not be used to cover “legacy assets” from past banking crises, even after the Eurozone’s banking supervisor starts work next year.

This prevents the ESM from recapitalising Spain’s crippled banks directly under a €100bn (£79bn) loan package agreed with Madrid in June. The burden will fall entirely on the Spanish state.

The Spanish newspaper Expansion said the AAA trio had “dynamited” the EU accord. The extra debt burden is likely to be around €60bn or 6pc of GDP, depending on bank stress tests to be unveiled on Thursday. Pessimists fear it could rise to 15pc of GDP once full losses from the property crash are crystallised.

The European Commission appeared shocked by the German-led volte-face, saying the original summit deal was “quite clear”. All EMU leaders signed a pledge to break the “vicious cycle” between banks and states. The document said the ESM must be allowed to “recapitalise banks directly”, clearly referring to Spain.

Meanwhile the economic heartland of Spain continues to press for more independence. Catalan leader Artur Mas has set off a constitutional crisis by calling a snap poll for November 25 – deemed a proxy referendum on independence. “If the government refuses to allow a referendum, we will do it anyway,” he said, calling on Spain to learn from Canada’s handing of Quebec and behave in a “civilised” fashion. Mr Mas said nothing could stop the Catalan people taking “sovereign decisions”, describing recent events as the most dramatic in the 300 years of Catalan history

Once again the outlook doesn’t look good! – but then why should bankers be able to shift €100billion of debt that THEY took on. I’m sure their average credit card holder would find it impossible to transfer a few cents of their debt back to the banks.

Meanwhile the pound continues to recover its recent losses against the Euro since the bond-buying scheme was announced. Is this the last Euro “big bazooka” failing already? 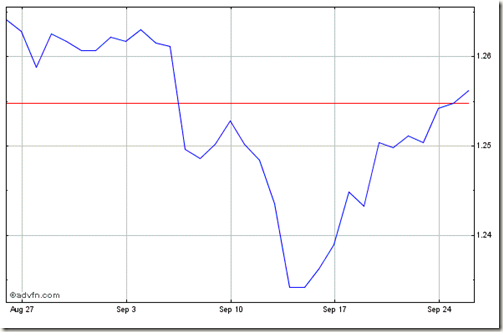 As Adrian – thank you – noted in the last “Comments” section the Telegraph’s  Ambrose Evans-Pritchard had penned an interesting article on Portugal which I have replicated here. Hard work but worth reading in my opinion:

“Nobody can accuse Portugal’s free-market government of failing to try. Premier Pedro Passos Coelho has gone beyond the demands of the EU-IMF Troika under the terms of Portugal’s €78bn loan package, winning plaudits from Europe’s austerity police and a pat on the head from Wolfgang Schauble.

“The Portuguese people have put up with one draconian package after another – with longer working hours, 7pc pay cuts, tax rises, an erosion of pensions, etc – all amounting to a net fiscal squeeze of 10.4 of GDP so far in cyclically-adjusted terms. (It will ultimately be 15pc). They have protested peacefully, in marked contrast to the Greeks, even though the latest poll by the Catholic University shows that 87pc are losing faith in Portugal’s democracy.

“Yet Mr Passos Coelho’s rash decision to raise the Social Security tax on workers’ pay from 11pc to 18pc has at last brought the heavens down upon his head. He was hauled in front of the Council of State – a sort of Privy Council of elders and wise men – for a showdown over the weekend. Eight hours later he emerged battered and bruised to admit defeat. The measure will not go ahead. Francisco Louca from left-wing Bloco suggested that the prime minister cannot survive such a defeat. "The government is dead", he said.

“I leave it to Portuguese readers to tell us on this blog whether that is so, but what is clear is that Portugal is entering an entirely new phase of this crisis.

“There are bigger forces than governments. Mr Passos Coelho and his young puppies have come face to face with the Portuguese nation. Unemployment has reached 15.7pc (36.4pc for youth). Citigroup expects the economy to contract by 3.8pc this year, a further 5.7pc next year, and yet again by 1.3pc in 2014. (and even then the current account will still be deficit – proof of the absurdity of EMU)

“The slump will be so severe that the budget deficit will rise, not fall. Shrinking tax revenues will outweigh gains from cuts. Lisbon is chasing its tail. Citigroup says the deficit will be 5.1pc of GDP this year, 4.9pc next year, and 5.4pc in 2014. This will play havoc with debt dynamics. Public debt will explode to 134pc of GDP by next year. At which point there will have to be debt-restructuring.

“If Citigroup is right – and views differ on this – Portugal is going into the same sort of self-feeding downward spiral as Greece. Debt-deflation is choking the country.

“As readers know, I have never believed that Portugal is fundamentally healthier that Greece. Its total debt level is over 360pc of GDP (Greece is nearer 260pc). Its international investment position is over 90pc of GDP in the red.

Portugal cannot recover under the policies in place. The government is asphyxiating the Portuguese economy for no useful purpose. It is pain without gain.

While mass default within EMU is theoretically possible, the country would do better to leave monetary union and restore global competitiveness at a stroke. There is nothing to be gained from dragging out the agony.

Finance minister Vitor Gaspar is convinced that Portugal can pull off an "internal devaluation" as in Latvia, even though its colossal public/private debt (much bigger than Latvia’s) is rising fast on a shrinking base of nominal GDP.

A former official at the European Central Bank, he has imbibed the reactionary doctrines that seem to flourish in corners of the Eurotower – views rejected by the International Monetary Fund and most of the modern economics profession.

I notice that his critics in Portugal tar him with the brush of Milton Friedman and the Chicago School.

If only it were true. Professor Friedman warned against the destructive effects of EMU from the beginning. He would be horrified by the collapse of the money supply across Southern Europe and Ireland. It was after all Friedman’s theories on the monetary causes of the Great Depression that made him famous.

His advice to Portugal would be immediate withdrawal from the Maquina Infernal of EMU, and the immediate retrieval of Portugal’s sovereign policy instruments.

The defenders of Portugal’s current policies have nothing to do with Friedman or orthodox monetarism.

They are disciples of an extremist subcult that believes in expansionary fiscal contractions, even though ample evidence from the IMF shows that such policies are mostly doomed to failure without offsetting monetary stimulus and/or devaluation.

Sadly, there seems to be almost nobody in public life in Portugal willing to tell the people that membership of the euro is the elemental cause of their current suffering.”

As reported above the Government of Portugal has announced that it will roll-back controversial plans for a social security tax hike that triggered protests across the country. Prime Minister Pedro Passos Coelho said that after meeting unions yesterday he’d investigate alternative income tax and capital tax measures. The plan would have seen employees’ contributions jump from 11pc to 18pc. Portugal is struggling to implement austerity measures demanded by the troika for its €78bn bail-out, warned the PM in a television statement:

As long as Portugal maintains its level of fulfilment, we know that we will have the support of our external partners. If we do not, we put at risk our fulfilment, and these guarantee mechanisms will cease to exist.

Finally one of our readers has sent in the following picture of a “bug” found on their driveway in Gaula last weekend – the thing looks terrifying before it has hatched (the one below, not above). Can anybody help identify this? What will it become (serious answers only please!). 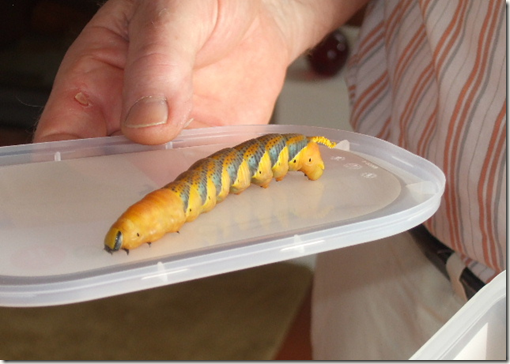