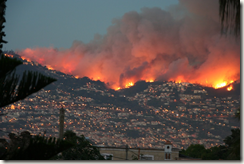 As our photo from last night shows, and the headline on the Diario web site reads "Hell descended into Funchal," with dozens of people running, fleeing the flames in the parish of São Gonçalo.

The situation on the ground became so chaotic that the CDS-PP Madeira urged the regional government to solicit aid from the government in Lisbon.

Soon after came confirmation that a C-130 military aircraft will depart for Funchal with 83 men specialized in fighting forest fires.

It was also known that the governments of Portugal and Spain were to evaluate a possible cooperation in fighting the flames in the parish of São Gonçalo, by calling in fire brigades from the Canary Islands.

Although many refer to the ferocity of the flames which are believed  to reached several homes (watching it last night – it must have!) the regional secretary for Social Affairs for Madeira, speaking to reporters yesterday, denied that any homes had been destroyed and said he was unaware of the existence of any injuries following the fire that broke out on Wednesday in the area Palheiro region above Funchal (“comments” on last nights blog indicate that the are around the  golf club  was badly hit). The following is a time lapse video from 21.35 to 22.15 last night showing no homes being destroyed!

Given the gravity of the situation the Minister of the Interior said it was impossible to quantify "some people were treated at Hospital do Funchal problems due to inhalation of smoke and panic attacks."

The coordinator of the Judicial Police in Funchal revealed that all the Criminal Investigation Department of Funchal Judiciary Police (PJ) is mobilized to establish the circumstances in which the fire occurred, originating in the Palheiro Ferreiro area of Funchal. "Right now, I can say is that the department is fully mobilized and we are investigating," said Ricardo Silva. The first thing he can do is start looking in the right place as the fire did not start there – again as our first photo last night clearly shows.

Due to the severity of the fire,  the Municipal Emergency Plan and the regional disaster plan were activated. According to the deputy mayor of Funchal, Bruno Pereira, the Municipal Emergency Plan was activated around 21:00 and  buses were summoned to transport people from that area to a canteen in Funchal and where those who were affected by the fire could stay the night "if necessary".

Madeira has been battered since Tuesday by several fires in different counties, with several corporations involved in fighting fires in the counties of Calheta, Ribeira Brava, Santa Cruz and Funchal. The fire in Funchal has taken the headlines from the one in Punto do Pargo which reading some reports could be quite serious. I will update this post if I find out any more.

Large fire reported in Santo da Serra in the Diario this morning. You can clearly see the column of smoke above Funchal (or is this yet another fire?). A source in Santa Cruz Fire Department revealed that the fire, in João Ferino, is "uncontrolled".

Health Centre and School evacuated in Camacha. To help protect the village of Camacha, Santa Cruz firefighters will now have the support of the peacekeepers of Câmara de Lobos. Jon & Debs have sent the following photograph from Casa Parsons in Gaula this morning, noting that it was in the region of Camacha across to Santo da Serra – certainly in the area of the Levada dos Tornos and Lombo Grande forest 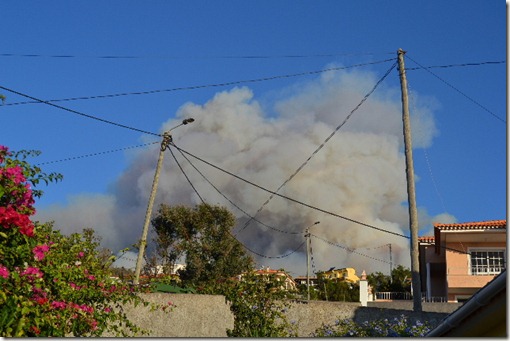 The deputy mayor of Funchal, responsible for municipal Civil Protection, said the fire that broke out in the area of Palheiro Ferreiro last night is now "limited and controlled," confirming that burned two homes and two dozen homes are affected

Thanks again to Jon Parsons – the C130 specially adapted plane has arrived at the airport, whilst the Santo da Serra fire worsens

Firstly the Judicial Police dismissed this afternoon rumours that have been doing the rounds on social networks regarding the identification of cars and suspects involved in the outbreak of fires. Ricardo Silva, coordinator of the DIC-Madeira PJ, assured that the Diario that so far the investigations are still on-going and it had not, as yet, identified any suspects. Rumours that the PJ was looking for two black cars and their occupants began circulating this morning on Facebook.

Out at Ponto da Pargo, this afternoon some elderly residents were forced to flee homes threatened by flames. The village is looking at the the worst fires in living memory with several active fronts since the early hours of Tuesday. The flames continued to evolve throughout the afternoon to the east into neighbouring parish of Fajã da Ovelha.

In Camacha in the municipality of Santa Cruz, at least three homes have been consumed by flames in Rochão, locality where firefighters evacuated several homes. Later it was confirmed that the situation was calmer after 20 hours of fires but it is reported that there is now another problem in the area of ​​the riverfront and Nogueira.

Because of the fires the Protecção Civil has appealed to motorists not to use  the Via Rápida in order to facilitate the movement of firefighters.

In Calheta another fire was reported in Lombo do Salão close to several homes. Also in Calheta there are reports of another fire. The Volunteer Firefighters of Calheta have been sent to the scene.

Porto Moniz: There has been a  fire raging since yesterday in Achadas da Cruz, with flames threatening homes and forests. "The situation has become a lot more complicated" said Mayor of Porto Moniz, Walter Cooper, who, judging by the background noise noticeable through telephone contact with the Diario, was near a front fighting the flames. The wind was observed in the brief telephone call which had to shut down in a hurry. This fire is being fought by the Fire Department of St. Vincent and Porto Moniz.