Men and equipment of four brigades will spend this morning engaged in fighting on multiple fronts of fire that burn in several places in Ponta do Pargo, Calheta, where empty houses, barns and crops have been destroyed.

According to the commander of the Volunteer Firemen of Calheta, João Alegria, active fronts which require more attention by the organisations involved in the operations are located at Pedregal, Ribeira da Vaca, Lombo da Ovelha and Cabo.

Apparently firefighters are spending a lot of time running from one place to another to extinguish the flames that sometimes trigger new outbreaks and fires that rekindle in places extinguished previously.

“By nightfall, the fire raged in the area of ​​Ribeira das Vacas and advanced to the Salon, causing panic populations.

The forest fire has consumed a large area of ​​eucalyptus trees, bushes and Feiteira between the site of the old Cape and Spine at Ponta do Pargo, since the early hours of Tuesday.

The Volunteer Firefighters were alerted by the Calheta 2:50 a.m. the morning of Tuesday 11 and mobilized elements aided by two heavy emergency room, two pump trucks and a car for support.

The device, joined by six members of the Forestry Police, having been ordered reinforcements to the Fire Department of San Vicente and Porto Moniz who have placed three men and a car in front that raged in the area of ​​the trailer.

The active fire had two fronts, one of which was to present a kilometre long and consumed a considerable area”

According to Diario again: “A devastating fire is ablaze in the area of ​​Santa Cruz, between the site and sidewalk Massapez S. Gil, endangering several homes.

A resumption of firefighters mobilized 27 ‘Santa Cruz Municipal’ to fight a fire near homes in the mills above the Assomada, in Caniço, an area of ​​scrub and eucalyptus which was the scene of fire on Monday night and early hours of Tuesday Monday.

The entire resources of Santa Cruz were called to urgently tackle a fire that raged on several fronts in the highlands of Santa Cruz County: The Levadas, São Sebastião e São Gil locations were later extinguished.

The municipality of Santa Cruz requested the support of neighbouring ‘Volunteers Madeira’ in Machico.

Apologies – the blog was down from late last night until this morning due to a technical hitch after an upgrade to the latest version of WordPress. Any php script experts out there!!!

Fire update as of this morning (Weds)

17 Volunteer firefighters battle in Ribeira Brava since yesterday afternoon a fire at the top of the Serra de Agua.

The fire started in the Faja of mares, Hydroelectric threatened the Serra da Água and now spreading in the direction of Paul da Serra.

As a precaution the Pousada dos Vinháticos and residential Encumeada were evacuated, ensure the source of fire.

Due to the fire, the PSP has cut the road linking Sierra Regional Water Encumeada.

The fire has already burned haystacks and cattle at the site of Terra Grande.

Thanks again to Peter for keeping me up to date on this one!

Fire update as of tonight (Weds)

The two fires that broke out on Tuesday at Ponta do Pargo, Calheta municipality, and Encumeada, Ribeira Brava, continued to track at 18:30 and concern for firefighters due to the proximity of housing.

In Ponta do Pargo, "the situation is more complicated in Lombo dos Marinheiros” said the source of the corporation da Calheta the Lusa agency, where the flames approaching houses. The same source, in this parish are a total of about 30 firefighters and 15 cars of various corporations.

The mayor of Calheta, Manuel Baeta, stressed that there were "no casualties" in the municipality and that damage was limited to forest and bush, including "some haystacks, spaces where people keep farming tools." Manuel Baeta reported a "distressing scenario", where firefighters have spared no efforts "to save homes," and acknowledged that the population is "very scared".

"The big problem is the wind that is helping the spread of fire," said the mayor, who said he feared the advance of flames to the village of Fajã da Ovelha.

In Ribeira Brava, the fire Encumeada where vehicles are four to 13 members of the corporation of the county, is destroying the forest, but was close to residences and hotel units, which forced the relocation of tourists to Funchal. "The concern was to defend the houses that were in danger and the damage is to be recorded in the forest," said deputy mayor, Marcelino Pereira, appealing to the population so that, although the situation may raise curiosity, not to move to the locations of fires and ride with caution on the roads nearby.

In this county, due to fire, have been closed roads of Laurel Ground-Encumeada, Serra d’Água-Encumeada and Encumeada-Paul da Serra.

As we look up towards Palheiro from Funchal tonight there is a new fire apparent behind the Nacional hill-top football stadium at Choupana – in the direction of Camacha but nearer – on the skyline. What a shame to see all this forest destroyed. Seems like we need more English rain here, and possibly fewer arsonists. As I write this the fire has dropped below the skyline and is heading towards the stadium and east toward Palheiro(21.15)

This is looking quite serious now – it has spread a long way in a very short time. 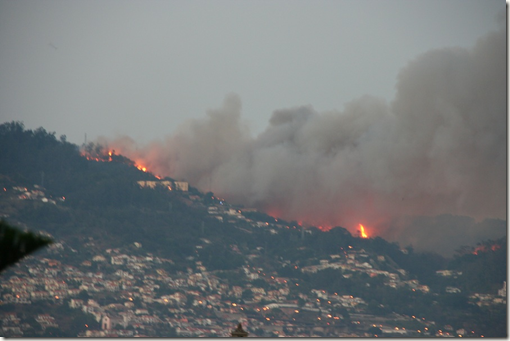 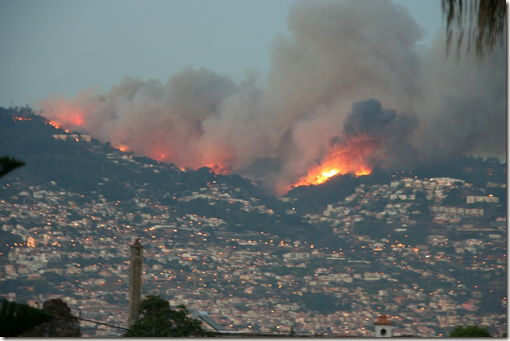 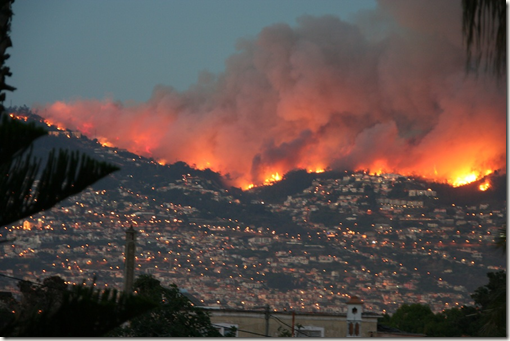 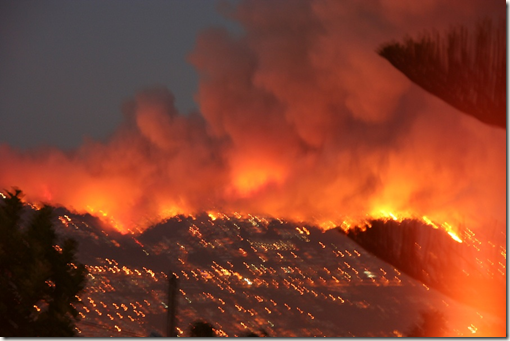 55 thoughts on “Fires in Ponto do Pargo, Santa Cruz and now Funchal”