Thanks for the photos from readers of the last sailing from Funchal unfortunately the blog software says they are too large to post so the image is from the Diario Newspaper. 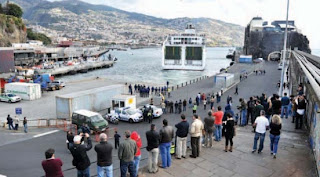 Frontcover of ‘I’ Newspaper Monday

“Expresso last Saturday published after some sources told the newspaper that
President Cavaco Silva is against some of Prime Minister Passos Coelho’s
measures to cut on expenditure, and fears the government will reduce the
public service and health to a bare minimum.”

Golden week for science made in Portugal

..Since 23 January ten scientists working in Portugal have won more than €6.6m in scholarships and prizes in the fields of natural and social sciences.

The “Voz Celeste” series of free concerts organised by the The Regional
Secretariat for Education and Culture (SREC) and the office of the Bishop of
Funchal and of course the staff at Colégio Church in Funchal City Square
presents another concert today Monday at 12.30pm.

The program for each concert will include a piece by a Madeiran composer,
featuring students and teachers from the Arts Education Coordinator Group
(GCEA).”

The tradition of the ‘panelo’ in Seixal transformed into an arraial

UK newspaper including the Sunday Times reporting José Mourinho is to leave Real Madrid at the end of the season in order to take up a new job in the UK Premier League.

All images from Diario Newspaper unless otherwise stated