Madeira is on Yellow alert for high temperatures until the evening of the 5th October.

“The weather in Portugal is being influenced by an anticyclone located northwest of the Iberian Peninsula ridge extending towards the western Mediterranean and leading to a situation of hot and dry weather.

From the 6th October a small drop of the maximum temperature on the west coast is expected, wind blowing from Northwest this fall which will cover all Portuguese territory in 7 days.”

There will be a reduction in flights during the Winter -on the left hand side- but, new connections are starting too – on the right hand side. See the graphics and article for detail:

From the Diario Newspaper:

link to article with analysis and comments http://www.dnoticias.pt/impressa/diario/285821/economia/285909-inverno-com-menos-voos

“the first should not arrive-in Madeira before Tuesday afternoon”

“After a day with winds at 25 knots, the approach of Madeira will be upwind in evanescent winds that will make this arrival even more complicated and stressful for skippers that are already quite exhausted by a complicated stage since the start.

If Sébastien Rogues (716 – Eole Generation – EDF Suez) positioning beacon remains silent for nearly 24 hours nothing to worry about aboard. At last positioning received, he was in the lead with 0.02 miles ahead of David Raison (747 – TeamWork Evolution). The uncertainty is whether he maintained this benefit or did David passed him again.

Those three (Sebastien, David and Jorg Riechers) and others are north of the direct route that requires them to readjust. When three others guys – more East – go straight on to Madeira: Rémi Fermin (741 – Boreal ), Guillaume Le Brec ( 667 – Occamat / ATD) and Lucas Montagne ( 618 – ONG Conseil). A direct route that allowed them to do a superb comeback, as they are respectively 6th, 7th and 11th.

As for Series, Benoit Mariette (599 – Odalys Vacances) which is into the lead since yesterday afternoon, still precedes Eric Llull (566 – Noble Cocoa) less than 3 miles behind and Clément Bouyssou (514 – Douet Distribution) less than 10 miles behind. As for prototypes it is on the finish line that we will know who the winner will be. But when? If the winds remains steady by then, the arrival of the first should not arrive beore Tuesday afternoon.

The good news of the night came from Radoslaw Kowalczyk (790 – Calbud). The cargo ship “Rio Negro” was able to approach him and communicate with him. The skipper has massive keel damages, but he is not in distress. And he continues slowly his way toward Porto.”

Paul requested in the comments sections for readers to contribute to a WI-FI MADEIRA SURVEY 2011. Basically, where are the hotpsots since the expansion of the network during Rali Vinho Madeira 2011 and what are readers personal experiences including quality of service in these HOTSPOTS.

Tobi posted the site of the supplier in the comments section..thanks Tobi. The link is below.

Anneke’s comments in the comments section included:
“Very good wifi in the Eden Mar hotel downstairs in the lounge.” Thanks Anneke. 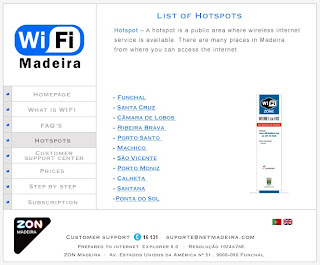 “The Portuguese surfers secured their title in Bundoran, Ireland, during the European Surfing Championships. In an ironic twist, Portugal were also awarded the trophy in 1997, the last time that the event was held in the seaside town. Portugal won 3 of the 7 different categories, two 2nd places, one 3rd and one 4th. The only category in which Portugal did not place was Longboard.

Thousands of spectators gathered along Bundoran’s Tullan Strand to watch the cream of Europe’s surfers compete for the top spot in each of their divisions. After what has been a very exciting and unpredicitable surfing contest, todays final proved to be no disappointment with Ireland’s Ashleigh Smith coming second in Europe in the womens bodyboarding division…”

César Figueira, barman of The Hotel Madeira Regency Palace will be preparing cocktails in The Mercado dos Lavradores (13h30) made with local products. The event is part of a programme to promote local Madeiran products.