The Madeiran business IlhaPeixe will farm a new fish specie Sargo (White Seabream) in 2012 with an investment of 338 mil euros co-financed by the Regional Government and the EU.

On the Centro site is a slideshow and I believe that the young Sargos are now in the containers with red netting in the Baía d’ Abra. 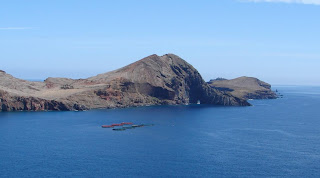 From Peter in the Comments section and updated by Paul:

The Instituto de Meteorologia has issued yellow and orange warnings for Madeira for rain between Friday and noon Sunday. Thanks Peter.

For weather updates click into the Instituto site:
http://www.meteo.pt/pt/index.html