The international prize, which is awarded each year to a living architect for significant achievement, was established by the Pritzker family of Chicago through their Hyatt Foundation in 1979. Often referred to as “architecture’s Nobel” and “the profession’s highest honor,” it is granted annually.

Eduardo Souto de Moura was born on the 25th of July, 1952, in Oporto, Portugal. He studied architecture at the School of Fine Arts in Oporto.

Eduardo Souto de Moura is the architect of The Casa das Histórias Paula Rego in Cascais Lisbon and the Braga football stadium image below.

He has been visiting professor at the architectural schools of Paris-Belleville, Harvard, Dublin, ETH Zurich and Lausanne.
He has participated in numerous seminars and given many lectures both in Portugal and abroad. His work has appeared in various publications and exhibitions. 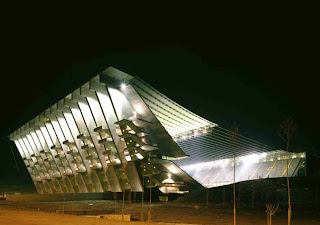 “His buildings have a unique ability to convey seemingly conflicting characteristics — power and modesty, bravado and subtlety, bold public authority and a sense of intimacy — at the same time”

Pritzker Prize jury chairman, The Lord Palumbo, spoke from his home in the United Kingdom, quoting from the jury citation that focuses on the reasons for this year’s choice: “During the past three decades, Eduardo Souto de Moura has produced a body of work that is of our time but also carries echoes of architectural traditions.” And further, “His buildings have a unique ability to convey seemingly conflicting characteristics — power and modesty, bravado and subtlety, bold public authority and a sense of
intimacy — at the same time.”

pdf on the Pritzker Prize:
http://www.pritzkerprize.com/2011mediakitphotos.pdf

Prince Charles this week on an official visit to Portugal met with outgoing premier Jose Socrates to discuss environmental issues.

“In the meeting, they discussed opportunities for bilateral cooperation on renewable energy issues. Socrates’ resignation last week has sparked a government crisis.

News agency Lusa quoted diplomatic sources as saying the discussions included how Lisbon could benefit from Britain’s experience with wind power. Portugal shared advances in power generation from renewable sources such as wind, water and solar.”

“The Prince of Wales earlier toured a company specialized in organic farming, taking an interest in the company’s use of renewable energy sources during the visit in Alcochete near Lisbon.

Portugal is the royal couple’s first stop on a 10-day tour that will also take them to Spain and Morocco. The theme for the trip is ‘commercial diplomacy,’ and boosting trade for Britain is high on the couple’s agenda.

TAP Portugal have confirmed they would be introducing six flights per week to Lisbon from Manchester. Manchester Airport are optimistic about the summer season.
Link: http://menmedia.co.uk/manchestereveningnews/news/business/s/1407235_jump_in_passenger_numbers_at_manchester_airport