Ronaldo in Porto Santo today – image from the Diario Newspaper

Is the international, world famous Portuguese/Madeiran football player Christiano Ronaldo really in Porto Santo with his agent for private business meetings? Is this an April Fool story not just in the Diario but in other Portuguese national dailies..?

Can readers spot an April Fool story or stories?

Saxophonist Branford Marsalis one of the headline acts at FUNCHAL JAZZ

The American saxophonist Branford Marsalis will be one of the headline acts at FUNCHAL JAZZ 12th edition on 8th July, 2011

The saxophonist has won 3 Grammies and will perform with his quartet.

“Aristides de Sousa Mendes do Amaral e Abranches, GCC, OL (July 19, 1885 – April 3, 1954 was a Portuguese diplomat. He ignored and defied the orders of his own government for the safety of war refugees fleeing from invading German military forces in the early years of World War II. Between June 16 and June 23, 1940, he frantically issued Portuguese visas free of charge, to over 30,000 refugees seeking to escape the Nazi terror, 12,000 of whom were Jews.” “He saved an enormous number of lives, but lost his career for it. In 1941, Salazar lost political trust in Sousa Mendes and forced the diplomat to quit his career, subsequently ordering as well that no one in Portugal show him any charity. He found he also could not resume his law career, as he was prevented from registration, and he was made to surrender his foreign-issue driver’s license. Just before the war’s end in 1945, he suffered a stroke that left him at least partially paralyzed. In his later years, the formerly much-honored diplomat was abandoned by most of his colleagues and friends and often blamed by some of his close family members. Aided by a local Jewish refugee agency — which had begun to feed the family and pay their rent upon discovering the situation — the children moved to other countries one by one in search of opportunities they were now denied in Portugal, though all accounts by them indicate they never blamed their father or regretted his decision. His wife, Angelina, died in 1948. Stripped of his pension, he died in poverty on April 3, 1954, still in disgrace with his government.”

In 1940 Life magazine called Aristides “the greatest Portuguese since Henry the Navigator” (July 29, 1940)

“This ill-treatment by his government for acts considered heroic in other countries was not unique to Sousa Mendes. Others similarly dishonored include Chiune Sugihara, the Japanese consul in Kaunas, Lithuania; Carl Lutz, the Swiss Vice-Consul in Budapest, Hungary; and Paul Grüninger, chief of police in the Swiss canton of Sankt-Gallen (Saint-Gall). Ironically, the actions that caused Salazar to dismiss his diplomatic representative brought considerable praise to him and to Portugal, seen internationally as a haven of hospitality for refugee Jews; the magazine Life called Aristides “the greatest Portuguese since Henry the Navigator” (July 29, 1940).”

“In 1987, the Portuguese Republic began to rehabilitate Sousa Mendes’ memory and granted a posthumous Order of Liberty medal, one of that country’s highest honors, although the consul’s diplomatic honors still were not restored. On March 18, 1988 the Portuguese parliament officially dismissed all charges, restoring him to the diplomatic corps by unanimous vote and honoring him with a standing ovation. He was promoted to the rank of Ambassador[9] He also was issued the Cross of Merit for his actions in Bordeaux. In December of that year, the U.S. Ambassador to Portugal, Edward Rowell presented copies of the congressional resolution from the previous year to Pedro Nuno de Sousa Mendes, one of the sons who had helped in the assembly line at Bordeaux, and to President Mário Soares at the Palácio de Belém. In 1994 former President Soares dedicated a bust of Sousa Mendes in Bordeaux, along with a commemorative plaque at 14 quai Louis-XVIII, the address at which the consulate at Bordeaux had been housed.
In 1995, a commemorative stamp was issued in Portugal.”

“In 2004,the 50th anniversary of Sousa Mendes’ death, the International Raoul Wallenberg Foundation and the Angelo Roncalli Committee organized more than 80 commemorations around the world. Religious, cultural and educational activities took place in 30 countries in the five continents.

A great homage was done in memory of Aristides Sousa Mendes at UNESCO Headquarters in Paris on 11 May and 10 November 2005, in a benefit performance on the occasion of the sixtieth anniversary of UNESCO and the fortieth anniversary of Portugal’s admittance. The baritone Jorge Chaminé gave a recital at the Great Hall. The French writer Jean Lacouture wrote that “in more than 50 years as a listener all over the world, I never heard such an incredible performance. What a marvellous homage to this great man!”

Development of Museum on site of decaying Sousa Mendes mansion

“The mansion that Sousa Mendes had to abandon and sell in the poverty of his final years was left for decades to rot and decay, and at one time was to be razed and replaced by a hotel. However, with reparations funds given by the Portuguese government to Sousa Mendes’ heirs in 2000, the family decided to create the Aristides de Sousa Mendes Foundation (Fundação Aristides de Sousa Mendes, in Portuguese). With assistance from government officials, the foundation purchased the family home in order to develop a museum in his honor. The house was classified as a Portuguese National Monument on February 3, 2005. The two events at UNESCO raised a 6,000 euro donation for the foundation; even so, the foundation’s president said in 2006 that the organization was finding it difficult to raise sufficient additional funds for the renovation.” Portuguese theatre, fado and dance in Paris this April; Had Wagner been Portuguese, his name might have been Ricardo Pais

“Rejecting all dictatorships, including that of the text, Ricardo Pais, in an homage to Pessoa, stages his poems in complete freedom.

Had Wagner been Portuguese, his name might have been Ricardo Pais, and instead of “total theatre”, today we would be talking about “infinite tourism”. It is under this title (Turismo infinito) that Ricardo Pais has staged, in an exemplary quasi austerity, a montage of texts by Fernando Pessoa. But this lover of “texts-texts that say things-things” has many other strings to his bow. Exiled in London while, in Portugal, Salazar’s dictatorship was ending, he will not subject himself to the “dictatorship of the text” and gladly claims he is a “music director”. The momentous presence of the fado, and the ineffable charm of the saudade that form the piece’s frame will be at the heart of Sombras, which nevertheless rejects any backward-looking folklore. Indeed, a polyphonic layout where architect-scenographer (Nuno Lacerda Lopes), video directors (Fabio Iaquone and Luca Attilii) and musicians (Mário Laginha, Diogo Clemente) bring their own touch, creates a totally new scenic landscape at the heart of which dance, under choreographer Paulo Ribeiro’s direction, will convey a certain euphoria. WithSombras, it is a matter “of extolling all the games of ambiguity with which theatre never seems to be satiated”…” 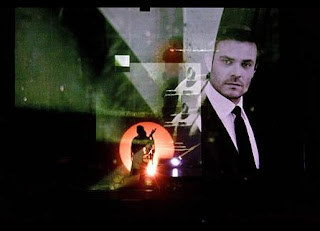 “With Paulo Ribeiro, the Ballet de Lorraine successfully treads the paths of a dance both generous and tersely energetic.

Although the Portuguese choreographic scene is in full bloom, it is rarely presented in France. Yet one of its most eminent representatives, Paulo Ribeiro, has received a wealth of awards. He was artistic director of the Gulbenkian Ballet from 2003 to 2005. White Feeling and Organic Beat were precisely created for this prestigious Lisbon company and the Ballet de Lorraine has judiciously chosen to revive those two pieces marked by an ample and dynamic creative force. In White Feeling, ten dancers in black trousers and tee-shirts, accompanied by the four accordionists of Danças Ocultas, engage in powerfully tonic virile jousts. In Organic Beat, a piece for thirty performers, Paulo Ribeiro has chosen lesser known compositions for percussions by John Cage, which become the seismic smithy for a choreography all flesh and sensuality. Somewhere between architecture and painting, Paulo Ribeiro’s dual design punctuates the geometry of movement with vigorous slashes and generous flashes. The Ballet de Lorraine’s dancers exalt festively this contemporary repertoire…”