Today’s photo – one of mine today for a change … A white peacock in the Municipal Gardens in Ribeira Brava. 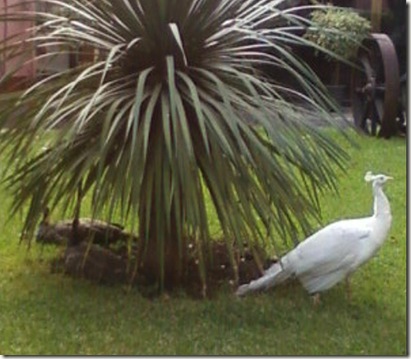 Many thanks to Paul for this important message from the dolphins, and also the Jet2 snippet :

Swimming with dolphins: latest research. “In the open sea off the coast of Portugal, Amanda Stafford, of The Dolphin Connection, tells clients to wait for the dolphin to approach them – and keep their hands to themselves. If dolphins aren’t feeling sociable, they make it obvious. "Dolphins in the wild can go in so many directions," she says. "You have to be able to read their behaviour to see when they’re interested in socialising." Photo : Bottlenose dolphin.

British researchers have found that swimming close to bottlenose dolphins and trying to touch them can be highly stressful for the aquatic creatures – preventing them from resting, feeding or nurturing their young. Swimming with dolphins may be sold as a life-affirming experience, but research shows that it can be traumatic for the sea mammals themselves. So is it time to stop? Link to full BBC article

Thanks a lot to Becky for this we snippet and video :

“We wanted to show our support for Madeira, after the tragic flooding and mudslides in February and we decided to choose this worthy cause for which one of our colleagues at the British Honorary Consulate in Madeira is already involved as a volunteer”, the Embassy said in a statement sent to The Portugal News this week." PORTUGAL NEWS

Many thanks to Elaine once again for yesterday’s top news stories :

Illegal streams.  Legally, the public water domain covers a strip of land of 10 metres width alongside non-navigational water, for example banks of streams. This would mean that the Minas Gerais building in Funchal is illegally built on public land bordering the Ribeira de São João. These public areas could be converted into mini dams to prevent the build-up of water and debris, for example at Fundoa. This has been done in Portugal where dams have been used to produce hydroelectric power of less than 10 MW and they supply 16% of the electricity produced in Portugal. Irresponsible dredging (without channelling) and deposition of material into the stream will cause a blockage at the mouth when there is an exceptionally high flow. The land upstream has to be forested without any illegal quarrying to prevent run-off into the streams. The diagram shows 10 solutions to 10 problems.

Clean Portugal.  Volunteers yesterday joined this initiative to clean Portugal in a day. Multidisciplinary teams included scouts, schoolchildren, military and firefighters. Câmara de Lobos had the most volunteers, over 300. They spent four hours in the morning cleaning the county then the authority supplied lunch, a diploma, and since it was the Day of the Tree, they were also rewarded with a tree for participating. In Santana, the councillor responsible for the environment joined a team of 12 and they cleared 700 kilos of rubbish out of a stream bed (photo). Another team of 12 in the parish of São Jorge cleared viewpoints. Santa Cruz had less rubbish than expected but 50 volunteers still managed to remove 120 100-litre sacks of rubbish and three car loads of large items. They worked in the forested areas of Santo da Serra, Gaula and Camacha as well as on the beach at Portinho in Caniço. The sea front at Ponta do Sol is now cleaner thanks to the actions of 20 people who cleared away wood, iron and other debris.

Three million Euros for works in Funchal. The council has amended the budget to allow 14 contracts to be signed for urgent works that start next week. Recuperation of paths and lanes in São Martinho, Santo António, São Roque, Imaculado Coração Maria, Santa Luzia, Monte and São Gonçalo are a priority. Caminho do Cabeço dos Lombos in Monte and the Estrada Luso-Brasileira are important roads that need to be repaired. Damaged pavements and infrastructure in the baixa area of Funchal will be attended to. The council will undertake a geological survey of unstable slopes in eight areas. These were a cause of landslides that affected homes – Três Paus/Eira do Serrado, Trapiche/Curral Velho, Laranjal, Alegria, Fundoa, Corujeira/Cabeço dos Lombos, Tornos and Babosas. The study will produce recommendations for future occupation of these areas, risks and preventative actions. If houses cannot be reoccupied, the council will provide alternative accommodation. 291 homes that suffered minor damage will be repaired as it is psychologically important for the owners to be back in their own homes.

Stabilization of the soil is a priority for forestry.  Afforestation projects stabilize the soil by the root system of plants holding the soil particles together, and protects against rainfall and winds. There is also organic matter created which helps to protect and change the soil structure and makes it more resistant to erosion. Trees such as the eucalyptus, pine and acacia are not being used as they compete with other species. The forests of Madeira occupy 54,000 hectares of which only 33,000 hectares are effectively covered by trees, occupied by too many introduced cultivated species. For public safety, the Regional Government is to buy 600 hectares of land in strategic areas of the serras in Ribeira Brava, Câmara de Lobos and Ponta do Sol.

Cars of the  PSP [Police] are ready for delivery 5 months – The 10 vehicles are waiting for despatch on two ‘stands’. The 10 squad cars have been here, already adapted and licensed,  since October with two dealerships. The Police Officers Trade Union is convinced that the Police Command have no money to pay for them.

25% live from pensions on Madeira.

Today’s main news headline : Crisis arrives to hit subsidies. With the safes empty (see picture) the Madeira government gave 57% less. The total value of subsidies in 2009 was €229 million. Cuts penalize more companies and public entities. Support reinforced for sport, culture, and councils. [loan] Guarantees double to €32 million. There is a special supplement on the matter in today’s Diário, the online edition at least. The first charts shows just about everything that receives government funding getting slashed last year. In high level terms, where the regional government provided €539 million of subsidies in 2008, it provided to the same sectors (associations, councils, culture, sport, education, religious bodies, companies and public companies) just €229 million in 2009. The hardest hit sector was that of companies and private companies, that saw it’s state handout cut from €377 million to €66 million in that same period. Just picking out a couple of examples from the complete and detailed breakdown that stretched to 8 pages. In sport, the Palheiro Golf Club saw it’s state handout quadrupled, and I didn’t even know that Uncle Bertie played golf. Funchal Tennis Club has seen its handout drop from €106,312 to €14,748 in two years. Overall the sport sector saw a slight increase in subsidies in 2009.

‘Green stopper’ stretches itself to Câmara de Lobos, Ribeira Brava and Ponta do Sol. Manuel António Correia announced the acquisition of lands for the purpose of reforestation. So the government coffers are empty (see main photo on today’s front page), but the government has announced that it to purchase 600 hectares [6 million square metres] of land in the interests of public safety. Very commendable objective, but why is it necessary to purchase all of this land in ‘strategic areas’ to replant it with whatever is needed to stop the topsoil collapsing in another storm that is statistically likely to be at least 100 years from now. Why not just plant whatever is needed, without actually buying all that land? Is anyone going to object?

The main sport / football headline today : Benfica thrash FC Porto and conquer the League Cup. Can’t deny that 3 – 0 was a good thrashing, started off by the worst ‘frango’ in goalkeeping history. After so many years of winning almost everything, it’s would have been embarrassing for any Porto supporter yesterday, not just to lose the cup to their fierce rivals, but to give it to them on a plate.

[sports] leaders offended with the "ignorance" of Arlindo Gomes. The president of Câmara de Lobos council said this week that he wouldn’t stand for blackmail, and council grants would be cut.

You can email [email protected] with any large contributions and other material.

1 thought on “Hands off the dolphins ; Video from 1955 ; €3 million of repair contracts in Funchal”