Dramatic photo from Tom … well you know what I mean : "East river going to mercados … all from that photo point has been destroyed". 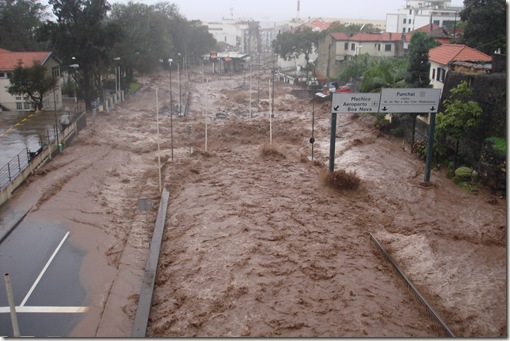 Many thanks to Paul for sending these in :

The impact will be quick to pass and Madeira will soon recover and return to normal hopefully within days.

…says Michael Blandy, chairman of the Blandy group, which has five hotels on the island and caters for the majority of British visitors to Madeira.

Michael Blandy said many people had been put off coming to Madeira but predicted that the impact would be quick to pass and that Madeira would soon recover and return to normal "hopefully within days.

"In reality it is a very small area that has been affected and the authorities are working incredibly hard to restore the infrastructure and ensure a return to normality." 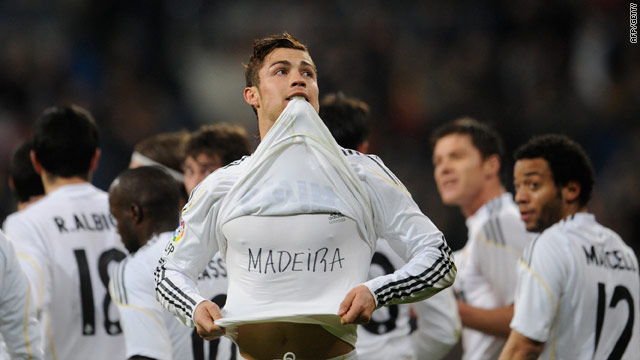 (CNN) — Cristiano Ronaldo is to play in a special benefit match for the victims of the Madeira floods and mudslides which have claimed the lives of at least 42 people. The world’s most expensive player has made himself available for a game between Portuguese champions Porto and a joint team from Madeira-based clubs Nacional and Marítimo.

No date has yet been set for the match, but Ronaldo has said he will help in "whatever possible way" after the tragic events of the weekend. Porto coach Jesualdo Ferreira added: "Porto want to express their condolences for all that has happened and, as a club, do everything necessary to help Madeira."

Real Madrid forward Ronaldo was born and grew up in Madeira and has a special football center named after him, which is next to the Nacional stadium. The 24-year-old paid his own tribute after scoring the first goal in Real’s 6-2 rout of Villarreal on Sunday, lifting his shirt to reveal a t-shirt bearing the name "Madeira" on the chest

"Nobody can be indifferent to such a tragedy, especially me," Ronaldo told the official Real Madrid Web site, www.realmadrid.com. "I was born and raised on the island. It’s given me so much. This is why I want to make myself available to help in whatever possible way.

"I would like to help official bodies and organizations to minimize the effects of this great tragedy and to get over them as soon as possible." Former World Player of the Year Ronaldo moved to Real Madrid from Manchester United in the summer for a record $120 million fee. CNN LINK

Don’t forget that there are heavy rains forecasted for today. The intensity is not comparable to that of Saturday, but with just 6 days between the two precipitations, there could be effects beyond the normal because everything is still so wet. There is also a separate warning for strong winds in Funchal and the high zones. This is from the BBC … many thanks to Pete for the link.

More heavy rain is forecast for Madeira later in the week, following the devastating floods on Saturday.

The island lies directly in the path of more storms developing in the topical Atlantic. The first of the storms is forecast to hit on Wednesday with a further more intense storm on Friday. With the clean up operation underway, the new storms are unwelcome news, raising the possibility of further destruction. As the funerals are held for the victims of the floods it is feared the death toll could reach 70. The winter months are normally the wettest part of the year in Madeira, but this winter has seen a succession of low pressures pass over the island. After hitting Madeira, the storms will then head northeast bringing disruptive weather to the Portuguese mainland and Spain. Nina Ridge explains why Madeira is seeing a series of storms.

And finally, another link from Paul …

European Commissioner Günther Oettinger confirmed that money from the EU’s solidarity fund was already being directed to the Portuguese island. Link to video of the whole or most of the debate:

Via rápidas and expressos are safe.

Some accesses reopen today – the road network of Funchal, weakened, recovers a little. See everything on the map. Traffic returns to within a few blocks from the centre of Funchal on Friday. Funchal Council president Miguel Albuquerque urges caution in relation to the weather. Movement is restored Friday in five streets around the city centre. In the daily update issued by Funchal Council on Thursday, Miguel Alburquerque announced that the traffic is returning this afternoon to various parts of the city. Parque do Campo da Barca also reopens Friday. With the forecasts of wind and rain for Friday and Saturday, Alburquerque once again reaffirmed that the authorities are prepared for any event, and stressed that there is no reason for panic or fear, but caution is necessary. The president warned people to be careful with their cars alongside water courses, in areas where there are land slides, and areas where there are trees at risk of falling. SEE MAP

Timor gives thousands to Madeira – Díli ignores the discourtesy and repays the friendship shown by the Madeiran people to the East Timorese cause in 1999. When East Timor was the stage of destruction and desperate for help, Madeira didn’t send a single cêntimo. The response has come regardless, with a donation of $750,000 (€556,000), from the government of the country, to help the victims of the catastrophe. The donation has been made as an act of ‘solidarity and support towards the people and authorities’ of Madeira, after the president of East Timor had sent a message of condolences to his Portuguese counterpart. In 1999, whilst on holiday in Porto Santo, Madeira’s President Alberto João Jardim guaranteed that he would not give "a cêntimo" for East Timor, causing harsh reactions throughout the country. "The popular philosophy taught me that each one should govern itself", said the president of the Regional Government on 29 August 1999. Later, after much controversy, in the Region and on the Continent, the statement was softened, albeit symbolically. Jardim then said he was never against helping the Timorese people, but only that Madeira could not spare the money to give any support. So Uncle Bertie’s blunders go back many years, crossing international boundaries, and upsetting innocent people in very difficult positions through no fault of their own. At least East Timor had the common sense to recognise that the words of one absolute idiot were not the words of a decent and generous people, and thank goodness for that, as that is a sizable and much needed donation to help the recovery of our island … and it comes from one of the poorest countries in the world.

Government rejects assistance offered by the Azores – They had 9 firemen and equipment ready to load on board to send over here. Santo Costa dismissed the offer, despite of having zones in need of help. The article itself then refers to 12 firemen and a coordinator-inspector, coming from the brigades in Ponta Delgada, Ribeira Grande, and São Miguel, of rescue specialists in areas of difficult access. There is an agreement between the two archipelagos and the Canary Islands to send mutual support in the event of catastrophes. The Azores team was assembled, equipped, and ready to go last Saturday, but on Sunday it was disbanded after those responsible for civil protection on Madeira (Santos Costa and Francisco Ramos Jardim) did not consider the help necessary. Politics over people is seems. Recent friction over the Regional Finance Law, and political differences in government colours are no doubt the underlying factors in my opinion. It is absolutely incredible that when some outlying areas have still not received much needed help, that a couple of idiot politicians could turn their backs on such an offer that had been prepared especially for this purpose, and set up through funding by the European Union.

‘Positive news’ after the flood from Paul, including statistics from The Regional Government of Madeira. Many thanks Paul. Der

The European Commissioner Mr. Johannes Hahn will visit the Autonomous Region of Madeira on the 6th and 7th of March to get acquainted with the finance needs to restore Madeira Island.

Show called “A flower to Madeira”

On the 28th of February a show will be organised called “A flower for Madeira”, organized by SIC (private Portuguese television channel) and “Coliseu dos Recreios”, with the patronage of His Excellency the President of Portuguese Republic and the participation of various Portuguese artists, in order to raise funds for Madeira victims.

Next Sunday. Madeira will have the 1st Cruise Ship calling at the harbour of Funchal with 4.500 tourists.

Schools will be reopened Saturday ? and next Monday.

Public services are operating with reduced services and will be normalized soon.

Public transportation, in Funchal, is available with 32 routes.

Wounded: 18 people are still in the Hospital.

Water Supply : In Ponta do Sol and Ribeira Brava, especially in Serra D’Água and Meia Légua the situation will be restored as soon as possible.

Electricity : Electricity is being established all over the Island, with the exception in small areas.

Do consider only the information given by the Regional Government.

Official information can be followed on : TWITTER     MADEIRA ISLANDS TRAVEL