Today’s photo – Many thanks to Elize … Funchal, after the flood had gone. I have received loads of photos, many thanks. 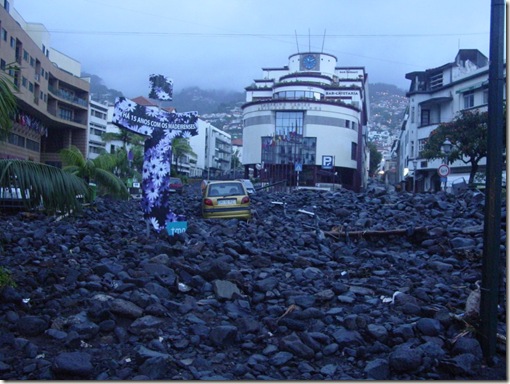 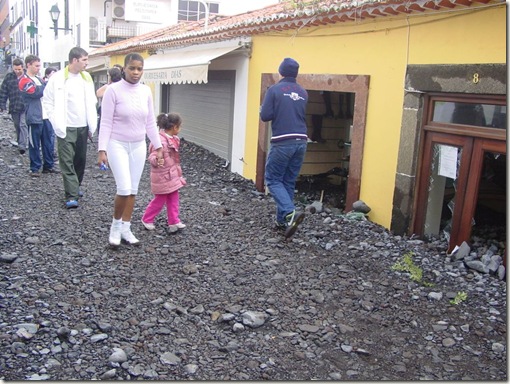 Please bear in mind that I am on ‘catch up’ at the moment, 4 days behind, so if anything is posted that no longer seems so relevant, I probably didn’t know … I apologise.

Tess did a piece on her blog about Funchal – ‘An Island in Shock’. "I’m sure you’ll be inundated with pictures – but this is just a written piece". And another : ‘Indomitable spirit’

MADEIRA DISASTER COLLECTION : Dioceses Cáritas of Funchal is collecting clothing and other goods to help those most affected by floods in Madeira. They will also inform the local population where the donations can be delivered. However, monetary donations can now be made.

This from Don re Madeira disaster donations : Attention here is some extra information that is important :
– (BANIF) IBAN PT 50003800011986711677151 and SWIFT CODE (BIC) BNLFPTPL
– If you use this BANIF bank account, then it gives tax benefits to taxpayers, in accordance with Articles 61 and 62 of the Statute of Tax Benefits.
– There are NO officials of the Regional Administration or City Council that are collecting funds for solidarity among the population. Official source SRTT. Thanks a lot Don

This contribution also from Paul :

The clean-up operation is being documented & filmed by a BBC team led by the reporter Robert Hall on the BBC news website: HERE

Photos of key Funchal city streets that have already been cleaned in 72 hours! HERE

Videos of key Funchal city streets that have already been cleaned in 72 hours! HERE

Outside the famous ‘Apolo Restaurant’ 72 hours after the flooding: Source: FLICKR

As a benchmark for all visitor accommodation in Madeira: “the hotel industry of Madeira was not affected and maintains all operating conditions safely.”

Statement on the floods from the United Nations World Tourism Organisation: HERE

As for the tourism sector, according to the information provided by the regional government, the hotel industry of Madeira was not affected and maintains all operating conditions safely. Hotel establishments, in general, are operational and there were not reported any difficulties or problems. The Madeira International Airport is also operational. "I am confident that Madeira will continue to count on its solid tourism infrastructure and services, which have made it the destination of excellence it is today." Taleb Rifai, secretary-general of the United Nations World Tourism Organization

[Just to change the mood a little] Pete though these links might be of interest :
DINAS DESERTS AZORES FOOD "I have been there a few times. I think they make the best food I have come across, if I was a condemned man my final wish would be one last meal there then you can do what you like ha ha". Thanks Pete.

Tom emailed and said : "Today [last Friday], the brand new dealership of Toyota was officially open in Funchal. I’ve been there. So was Mr. President uncle Bertie. He is a very good talker. His Speech was good and lasted around 15 min. without any prompter or note. During Toyota President speech the lights went off. all was kaput and dark. Fuses could not keep so much power taken from the electrical system. There were two TV stations and maybe four Radios. After we have a very nice reception, including lots of booze and finger food. During radio interview the President was visibly upset about the lack of funds from Lisbon and City staying behind with payments to subcontractors".

Difficult situations in the high zones of Funchal. There are suspicions of people buried in the Luso-Brasileira, as a consequence of a movement of an illegal dump in Babosas.

Forecasts now admit that the water discharge from Saturday  may pass to the side of Madeira.

Today’s main news headline : Solidarity in force – The determination of the Madeirans in the recovery after the storm is having a notable benefit : in the solidarity [fund raising] accounts alone there are €2 million. But groups such as ‘Pingo Doce’ are making their own contributions. The Madeira Beer Company is also restocking outlets in the worst affected areas in Funchal and Ribeira Brava ‘on the house’.

"There is only one Madeira" The president of the Republic thought highly of the recovery effort in Funchal and visited problem areas such as Tabua. He needed to tread in the mud and wander around in the rain, but Cavaco Silva didn’t avoid the problems. "Shoes are plentiful, but there is only one Madeira" he declared. The main picture shows Cavaco in Ribeira Brava, inspecting the remains of the old bridge. The popular view is that the bridge was damaged, probably beyond repair, purely by the force of the water, but that isn’t the full story.  One of many stories yet to be told when the dust settles, unless someone can enlighten us beforehand?

500 vehicles damaged – The damage calculations in the ‘car park Madeira’ suggests as much as €7.5 million.

The main sport / football headline today : Solidarity [fund raising] match may be in Madrid – The Spanish football federation forgives the ‘highlighting’ of "Madeira" by CR9 [Cristiano Ronaldo]. Referring to the t-shirt incident of the Madeiran footballer during a Real Madrid match, as mentioned yesterday. It would be shame, but given the low level of support for football matches on Madeira, the potential for fund raising would probably be much greater in Spain, bizarre as it seems.

Ellen has kindly covered some of these stories in the ‘blog comments’ … many thanks.

On the TV news (RTP) this morning, the cost of repairing the flood damage in Funchal has been estimated at €200 million. I guess that is just for public property, and the city businesses will have to claim through their insurance policies.

There has also been a warning on the radio about the quality of water, where supplies were affected by the floods. The advice is to boil water, or add bleach, depending what the water is to be used for.

Just announced at 12.20 pm today by the Regional Government the reinstatement, some with alterations, of many of the bus routes cancelled since Saturday. It was a lot of information, probably best obtained from the website(s) of Horários and Rodoeste.

Many thanks to Paul for sending this in :

Friendship and support from Jersey – My homeland has launched an urgent appeal for the victims of the Madeiran floods. The overseas aid charity Jersey Side By Side is urging Islanders to co-ordinate any fundraising efforts into one larger appeal which Side By Side will run and endorse.

It is hoped that as much money as possible can be raised, but also that the appeal will act as a symbol of friendship and support to the Madeiran community both in Jersey and Madeira. Jersey Side By Side chairman Mike Wavell said that Jersey’s close relationship to Madeira meant it was important for Islanders to show their support.

A concert in aid of the appeal is already being organised by a group of young Jersey musicians currently in Madeira. It is hoped the event will take place on Saturday 6 March at St Thomas’ Church. LINK

18 thoughts on “Funchal after the floods ; Charity appeal ; and other news headlines from Madeira”