Today’s photo – Many thanks to Selina … Christmas 2009 nativity scene 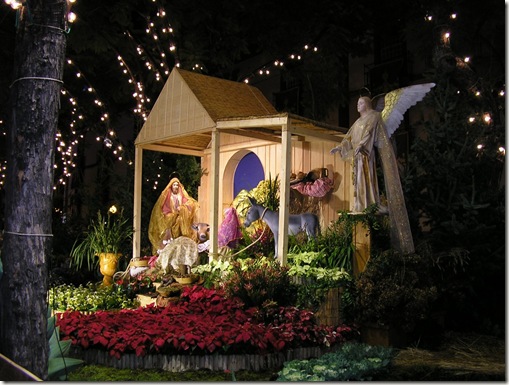 Many thanks to Paul for spotting and sending in this blog he found :

Life in Madeira for a young American including the club scene : "I honestly don’t think the general population works Friday to Monday because I can’t think of any way people could party in this manner and still be functional for a full day of work on Monday"

"..the bars and clubs here don’t even get going until 1am!! The nightlife here in Madeira begins after midnight and party go-ers trance the night away until 7 or 8 am"

The blog of Kaitlin Sowinski, "a young American amazon from Hopkinton (Rhode Island – US) who has lived in Madeira for 3 months and plays professional basketball with Clube Amigos do Basquet (CAB) of Funchal. In her blog she describes how she (tries to) adjust to live on a island like Madeira. The differences she encounters in the area such as culture, food, language, and daily living habits. Also she gives a firsthand impression of what options are available for people her age, …. what to do and having fun (or not) …. in comparison with US ’standards’." : the words of Don Amaro

Madeira is not immune from being hit by a Tsunami – Inventory of risk areas set out in Geological Cartography, to be published. The tsunami in Asia was 5 years ago.

Bad weather leaves Ponta do Sol without water – The supply was cut due to a rock fall in Rabaças. Yesterday, priority aid was being given to households unreservedly. Tap water is currently undrinkable in Ponta do Sol and also in some parts of Ribeira Brava. A flood that occurred in the early part of Xmas eve damaged the mains supply in Rabaças, interrupting the service. During that day many residents were not having any problems as there was water stored in the household tanks, but the problem increased as time went on. Some people contacted by the Diário reporters didn’t know about the warning given by the Council of Ponta do Sol to avoid consuming the water, as there were strong chances of it not being of adequate quality. Others were already aware of the situation and just did not use the water, even for washing. The problem will take several days to resolve, but in the meantime a tanker from the fire brigade will drive around the affected areas to provide drinking water. Various parts of Santana are also without water, and the problem in São Vicente has been well publicised.

According to the same article, bad weather ravaged / destroyed the sea-front walks (boardwalks) in Faial and Madalena do Mar.

Today’s main news headline : Civil servants and public workers cost €688 million – Over 35 thousand Madeirans work for the government, councils or public companies. They cost 688 million Euros a year and represent 30% of the employed on Madeira. That doesn’t sound like a story that cropped up over Xmas, like the tsunami one, so I guess the Diário staff enjoyed Christmas like everyone else. So 30% of the workers on Madeira are civil servants and public employees, so no wonder Uncle Bertie wins the elections time after time, if they all work for him. Typical indicator of a dictatorship I would imagine, or perhaps even a communisty sort of regime. A quick calculation reveals that every man woman or child, living on Madeira not including the 35,000 workers, has a tax burden of €3,200 just to pay the 35,000 civil servants. So around 54% of the remaining population have jobs and pay tax on those jobs, so that’s almost a €6,000 tax burden per non-government employed taxpayer, equivalent to around the annual minimum wage. Even with taxes from other sources, businesses, indirect taxation, and from the 35,000 government workers themselves etc., Madeira cannot sustain this wage bill unassisted, so recent comments in Portugal that Madeira  feeds off of  the continentals are looking decidedly believable. These 35,000 jobs are also likely to be cushy numbers, very well paid, and very secure, and are highly prized and sought after, and also give one considerable social status. Mind-blowing numbers, for providing public services that strike one as not being particularly efficient!

The sport / football headline today : Angola call on Verde-Rubro Djalma. Nacional player Mateus is out of the ‘Palancas’, through injury. Djalma has been called up to represent his country in a competition in Angola, and may be out of Madeira for the whole of January. His fellow countryman, a Nacional player, is meanwhile sidelined with a knee injury.

If anyone else can oblige with the translation of any of the ‘blank’ or sparsely filled headlines, or other news stories, here is the link Thank you in anticipation.