TODAY’S PHOTO : Thanks to Tobi … A great photo from the Flower festival in 2008. Tobi sent me so many great photos of the event that I couldn’t show them all, but I kept this one back to brighten up a rainy day, and this does seems to be the appropriate time. 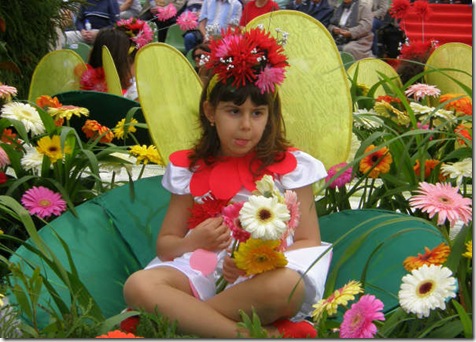 ‘Rivers Ready For The First Rains – Government Assures That The Cleaning Works were Already Done’. The water courses of Madeira have been cleaned ready for the rainy season, as they always are at the end of the Summer / early October.

The giant pumpkin weighing 45 kg in Calheta, as mentioned yesterday.

Nacional managed a  1 – 1 draw in Austria last night in the Europa League. The Madeiran Ruben Micael scored for our boys. Austria Vienna only managed one shot on target according to one website … and scored, so Nacional might feel they were a little unfortunate. MATCH STATS That takes up most of the front page of the Diário today.

For anyone planning their weekend here, the Diário weather forecast might be useful : ‘Madeira On Orange Alert – Rain is going to continue until Sunday’. At times the rain will be heavy over all of the archipelago. The wind will also be strong, especially in the high zones. An orange alert is the fourth highest on a scale of 5. The Regional Service for Civil Protection advises against trips into the mountains by car and on foot. Cancel those bbqs and fishing trips, and stay at home and write something for the blog instead, or send in some of your favourite photos or videos … that’s my advice.

A couple of photos from yesterday, and as usual the tunnels can’t cope with the heavy rain.

One of the articles today is about leaking Rodoeste buses, where apparently two buses leaked under the heavy rain, and passengers had to use umbrellas inside. The Diário says there were two cases reported, the company says it was only one.

The PSD had to cancel their political rally in Santo António, and the concert by top Portuguese artist Mickael Carreira. The rain in this case is a bit of a political leveller, with the social democrats unable to outperform the other political parties that have no money for such events.

Many thanks to Paul for sending this, and Elaine for writing it :

Popemobile will Carry the Pilgrim Statue of Our Lady of Fatima. The statue will arrive at the airport on the 12th October. Religious, civic and military personnel, the Bishop of Funchal, philharmonic band and children’s choir will celebrate the VIP arrival. It will be then taken by the Popemobile towards the Praca Municipio and Se Cathedral. It remains there until the 18th then goes on tour around the island. Last visit was in 1948.

For the Protection of the Poor Reinforce Food Service. The Social Services will help the charity to now serve all meals on Sunday and want the homeless to be directed towards its building. Serves 25 breakfasts, 80 lunches, 45 snacks and expects to serve up to 50 dinners to the needy. Not needed so much during summer due to seasonal agricultural work but now increasing in usage due to poorer weather. 380 people registered, 178 use its services regularly.

Exportation of Douradas Expected to Increase 80%. 700 tonnes of the farmed fish Dourada expected this year. Mainly exported to the Portuguese mainland. The aquaculture here competes with the Mediterranean aquaculture. Warmer Atlantic waters increase the reproduction cycle so the commercial size of the fish is reached in 10 – 12 months rather than 13 – 16 months.

Regional Government Funding of Social Housing and Lots in Porto Santo. Rental property needed for the elderly and lots for self-build for young couples. Helped 380 Porto Santo families so far.

Economy. The ECB find it ‘reassuring’ that the banks are ‘adequately capitalized’ as they may only loose 400 billion Euros by 2010. The Euro falls against the dollar and gains against the sterling (0.9142). Ireland has its 2nd referendum vote on the Lisbon Treaty today.

BE Propose New Versions of ‘Park and Ride’. The political party BE (Left Block) want to help reduce congestion in Funchal by increasing public transport use without affecting the taxi drivers.

Revalidation of Passes Clogs the ‘Horarios’ Balcony. Students have had since the beginning of September to renew the annual bus passes but have queued for the past three days. 35.50 Euros per month.

Culture. Madeira surfer ranked 8th out of the world top-10. Fatima Lopes, the Madeiran fashion designer, has had her ‘Air’ collection shown at the Paris Fashion Week. Fado singer, Mafalda Arnauth, returning to the Choupana Hills Resort on the 29th, 30th and 31st October. Exclusive dinner, 75 Euros, including drinks.

And also many thanks to everyone for the various snippets in the comments!

Please send any topical or Madeira related photos or videos to blog@madeira4u.com to appear on this blog. Photos may take a while to appear, depending on the number waiting. Please don’t send copyrighted material.